We’re saddened to hear that climber and inventor Hamish MacInnes has passed away peacefully at his home in the Highlands at the age of 90.

Climbers and hillwalkers alike have a great deal to thank Hamish for. Over the years, the Scotman developed many of the modern-day technologies, safety devices and rescue services we so often take for granted when we’re out in the hills.

From the Glencoe Mountain Rescue Team (one of Britain’s busiest), to the vital Scottish Avalanche Information Service (which now stretches to cover a bulk of the Highlands across six separate regions), Hamish’s work in setting up these organisations has gone on to help save countless lives in the Scottish hills.

“I was primarily interested in safety for climbers, not profit.”

An extremely keen engineer, Hamish was just 16 years-old when he built an entire working car. That same year, he would go on to climb the Matterhorn.

Notable climbing feats he achieved throughout his life include first winter ascents of Crowberry Ridge Direct and Raven’s Gully on Buachaille Etive Mòr with Chris Bonington in 1953 and, alongside Tom Patey, the first winter traverse of the Cuillin Ridge.

Combining his two passions of climbing and engineering, Hamish would go on to create some of the early forms of the modern climbing equipment we rely on today. This started with the production of the first all metal ice axe back in the 1940s and a design for a rescue stretcher that went on to be used by rescue teams and special forces around the world. 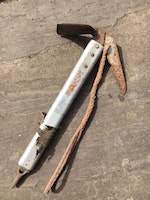 Another development that Hamish isn’t credited for – but perhaps should be – is the down-turned ice axe. By simply turning the axe head in a downward position it gave climbers much more bite into the ice compared to the traditional horizontal pointing picks which were prone to ripping out.

“Hamish leaves a bright legacy within the climbing community”

Hamish’s Terrordactyl ice axes became popular within the close-knit climbing community in Scotland and large climbing companies soon rushed to copy his winning designs. Hamish wasn’t upset by these questionable ethics however, instead declaring that he was “primarily interested in safety for climbers, not profit.”

Similar to the passing of Joe Brown and Don Whillans, Hamish leaves a bright legacy within the climbing community. Thanks for all you’ve done, Hamish.

Check out more information on Final Ascent: The Legend of Hamish MacInnes, here.

The new product that transforms any rucksack into a raft...

The RuckRaft By Above Below | Game-changing Gear

The reaction following the news that the mountaineer, who was part of the first British team to summit Everest, has passed away

That's right, we've got one of the camping gear specialist's new super comfy mats up for grabs

Cyber Monday 2020 | Find the Best Outdoor Gear Deals
We use cookies on our website to give you the most relevant experience by remembering your preferences and repeat visits. By clicking “Accept All”, you consent to the use of ALL the cookies. However, you may visit "Cookie Settings" to provide a controlled consent.
Cookie SettingsAccept All
Manage consent