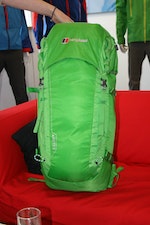 After an exclusive audience with the ridiculously warm Ulvetanna Down Suit and other insulated items up at Berghaus HQ last week, we also got to take an early look at a couple of new packs due out in September 2013 including a revamped Arete, one of the best no-nonsense mountain packs out there.

We also got an even earlier look at some stuff in the pipeline for spring 2014, but that’s so secret we’re not even allowed to mention it – oops… So forget we said that.

Top of the packs is the Arete, a simple but effective mountain pack in 35 and 45L versions. It’s been around for a while now, but for this autumn it gets a bit of face-lift. The one in the pics is the Arete 45 and the first obvious change is to a new Nylon Diamond Rip-stop fabric which is tougher than the current material and looks cool into the bargain.

The design is streamlined with a snow-shedding, thermo-formed back panel and a slant-cut base for easier descent when facing outwards. The 45-litre version will also come with a removable Crossbar Load Transfer frame to add a bit of stability when hauling heavier loads, but with the option of cutting weight when needed.

The other obvious new feature is the adoption of the Finger Grip Hip-belt first seen in the Berghaus Bioflex packs. Its an interesting horizonatally split belt, which means you can wear it with a climbing harness and still acess the gear loops on your harness by simply allowing them to sit through the split in the belt.

Ingenious stuff. Or you can just fold the belt back out of the way if you prefer. Also new is a larger lid pocket plus the elasticated top axe loops first seen on the Caldera alpine pack last year. The Arete 45 weighs in at around 1130 grammes while the 35 is just 990g. Berghaus says, and we agree, that while the pack was developed for technical climbing use, it’s equally effective as an all-round mountain walking and scrambling pack.

Looks like a good upgrade to an already very decent mountain pack and less leftfield than the zip-happy Caldera too.

The other big news in packs, literally, is a new, lightweight expedition hauler called the Expedition Light 80. The pack’s been developed over the last two years with prototypes being used by the likes of Mick Fowler and Philippe Gatta as well as Leo Houlding in the Himalayas, Greeland and on Asgard.

The idea was to create a pack which would be as light as possible without sacrificing versatility or function. Having used an earlier Berghaus expedition pack in the Andes, we can tell you that it’s a fine balance and while lightweight minimalism is all very well, sometimes support and comfort with big loads are just as important.

The Expedition Light is, fittingly, almost comically light for a big mountain sac. Total weight is around 1500g, but by stripping out various components, you can drop it down to just 1000g when necessary. A big slice of weight saving comes from the light but extremely tough 210D Dyneema Rip-stop fabric, which was apparently requested by Mick Fowler.

A few years back one of the Huber brothers tossed a Berghaus pack made from a similar fabric several thousand feet down onto a glacier never expecting to see it again. Remarkably it survived with just a bent frame and a few scuffs to show for its  impromptu base jump…

Other features include a removable lid, a snow-shedding, Fusion 3 back-system complete with an aluminium reinforced removable plate and interesting, weight saving body-mapped padding that matches up with similar foam pads in the back panel of the pack itself. Looks good to us, that previous expedition pack was painfully spartan, the new one looks rather better thought out.

Finally, you get all the technical climbing mod cons you’d expect: axe loops, gear loops, compression straps, rope strap, wand pockets, daisy chain, ski carriage capabilities et al. It also has an extra-long extension which means you can use it as a ‘half bivi bag’ if needed, maybe more than half if you’re quite short.

Like the down expedition kit, it’s quite a specialist thing, but if you’re after the ultimate in multi-day mountain packs, with the capability to haul big loads in reasonable comfort then strip down to something sleeker for technical mountain use, there’s a new contender on its way.

Both the new Aretes and the Expedition Light 80 will be available around September 2013, more information about the current Berghaus range at www.berghaus.com.

Scoop look at what's new from Rab later this year including water-repellent down and their lightest ever down jacket.

First early looks at new down clothing and sleeping bag from Berghaus plus a Gore-Tex Pro peek.

Montane gets NeoShell and super-slick construction for its waterproof shell jackets out later this year - here's what's coming your way.