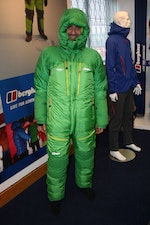 How cold is cold? In the case of Ulvetanna in the Antarctic, the scene of Leo Houlding’s recent climbing trip, ‘cold’ is potentially minus 50˚C, which is partly why a lot of recent emphasis in the Berghaus gear development labs, has been on creating a range of advanced down clothing.

It wasn’t just about keeping Leo and team comfortable and safe in those extremes of temperature though, the lessons learned during the development of, say, the über warm Ulvetanna down suit, have also trickled down to the other new down items in the autumn/winter 2013 range.

Crucially, pretty much everything in down from Berghaus this autumn is also water-resistant Hydrodown. Berghaus was the first brand in the world to use water-resistant down and its taken them from nowhere in the UK down clothing market up into third place. It’s great stuff for three main reasons: it gives you a bit of reasurance if you get caught out in the rain as it won’t stop working if it does get wet. For prolonged expedition use, it retains more loft even if it gets progressively damper from repeated use in cold environments. Finally it’s easier to care for and will retain most of its performance after washing, even without specialist drying techniques.

But while that’s great, there’s a lot more to down clothing than just very clever down and it’s taken two years of development to create, for example, the Ulvetanna down suit.

The Ulvetanna down suit actually started as two-piece design, the idea being the you could choose to wear the jacket on its own or the whole caboodle when needed. Unfortunately that concept didn’t survive contact with Greenland. The whole Ulvetanna team headed out to Greenland equipped not just with the Berghaus prototype designs but also example of suits from other brands.

The Mtn.Haus design team and the athletes set up shop on a frozen fjord in temperatures of -25˚ and windspeeds of 50mph plus. Ouch. They then took it in turns to stand motionless wearing the different garments while temperatures and humidity sensors recorded localised data from all over the body. In addition, thermal imaging gave a visual picture of where heat was being lost.

It’s not just about heat loss though. Climbers need to move on technical ground so they need both mobility, but also lack of bulk. One simple reason for this: if you’re climbing, you need to be able to see your feet clearly. One big disadvantage of the two-piece suit was that the double-bulk around the midriff made that really hard to accomplish.

Which is why, after two solid days of testing with six subjects, the two-piece idea was shelved in favour of a zoned one-piece, erm, a down onesie if you like. The big advantage of the Greenland testing, says Berghaus, is that they came back with more advanced and detailed body-mapping data than ever before and, in the process, discovered that Leo Houlding – and we quote – ‘has kidneys like a girl’.

That’s not belittling either party by the way. Women lose heat in different areas than men with the kidneys a particular warm spot.

The rest of the development took place in a climate chamber at Loughborough University at a temperature of -25˚C where both the suit prototypes – two of them – and sleeping bag were evaluated using thermal-imaging equipment, with Houlding simulating belay use by remaining static for an hour at a time.

The end result is the Ulvetanna Down Suit you can see in the images. It’s a one-piece design that uses 700g of 850+ fill power Hydrodown and will, once it goes on sale later this year, retail for somewhere between £900 and £1000. It has a total weight of around 1800g – not the lightest out there, but then when you’re climbing, toughness matters too.

The really clever stuff though, is what you can’t necessarily see. the suit design uses three different fill zones – high, medium and low with the different warmth ratings used according to need. So areas like calves, ankles, armpits and the insides of the legs and arms get a low fill, while areas of greatest heat loss around the kidneys for example and the front central area plus the outside of the upper arms get the high fill, with the rest being medium.

The outer shell of the suit is made from Gore Windstopper Active so is totally windproof and also extremely water resistant. Seams are either taped or welded for wind rather than water resistance and all fastenings, the hood in particular, have been designed to be glove friendly. There are also reinforced AQ fabrics in areas which are prone to damage, like forearms for example.

Zips are high-performance, easy-sliding YKK Vislon items and there are lots and lots of pockets, some nine internal and external ones including water bottle pockets carefully placed to hold bottles comfortably close to the body.

And there are a fair few zips too. Out back there’s a carefully constructed – and baffled – drop-set for toilet duties, which are necessary even at 8,000m plus and if you do get a tad warm, you can vent using both the main-zip at the front and extended leg-zips.

Will you be buying one? Unless you’re attempting an 8,000m peak, possibly in winter, or heading off for some serious polar mountaineering, the chances are very slim, but then the Ulvetanna Down Suit is what marketing men call a ‘hero’ product and a pretty impressive one at that. Where it gets interesting is that some of that down and body-mapping technology is making its way into more conventional down clothing.

Finally, a big thanks to Berghaus PR man Chris Lines who had the misfortune to fit into the sample size Large suit and consequently got to roast gently while we took photos. That’s what we call dedication to the cause.

Also ridiculously warm, is the matching sleeping bag, a serious expedition bag with some interesting ratings: think, -41˚C comfort rating, -54˚C limit of comfort and a ridiculous -76˚C Extreme rating. And all that from a bag that weighs ‘only’ 1900g.

It too is body mapped with high warmth zones around the torso, head and toe areas and medium zones underneath the body and around the legs. Like the suit, it was developed with input from the cold chamber at Loughborough, leading to a redesigned neck baffle and other improvements to eliminate cold spots.

Like the suit it uses 850+ Hydrodown and it has a Pertex Endurance outer, which is highly water resistant. Finally it’s cut deliberately roomy so you wear additional clothing if needed, like, erm, the down suit… Again, it’s a serious bit of ultra-cold conditions kit, but the Hydrodown should work well in those circumstances. Often in expedition use, down gets progressively damper and less efficient as it absorbs body moisture, with water-resistant down, that shouldn’t happen.

It’ll be interesting to see if Berghaus can manage a similar combination of wamth and lightness in lighter-weight bags going forward.

Also new this autumn and developed in Greenland with Berghaus snow-boarder Julia Pickering, is a women’s version of the men’s Ramche Jacket with its aggressive body-mapped construction. As with the men’s version it uses that top notch 850 fill down in a Pertex Quantum GL shell, but mapped to correspond to women’s physiology.

That means more insulation around the kidneys, but also around the breast area where women generate and lose more heat.

Like we said, pretty much the entire range of Berghaus down kit uses water-repellent Hyddrodown from this autumn 2013 from the Extrem range, through Mountain to the Everyday Outdoor range of kit. The green jacket on the left is the revamped Furnace Jacket which comes in both men’s and women’s versions and uses both Hydrodown and some bodymapping, with different levels of insulation at the sides of the trunk rather like the Ilam jacket.  It’ll sell for £170, weighs around 350g and based on the sample we have here to play with, is suprisingly snug at that weight too.

The blue Scafell jacket comes from the Trail range and uses duck down – there’s a gilet too – and is an all-round warm jacket with a price tag of £150. Other interesting stuff includes a jacket called the Torridon which mixes duck down with a synthetic fill and is reversible too. We’re not sure what to make of it, but it’s the first reversible, down and synthetic jacket we’ve ever seen…

And finally, just to show that it’s not all about the tec, the Ulvetanna Down Parka is a faux fur hooded monster of a jacket with an AQ waterproof shell  and duck down, which also saw non-technical action in Antarctica.

Finally, seeing as we were there, we asked about the Berghaus take on the new Gore-Tex Pro fabric. There are, potentially two main choices using the new, more breathable version of Gore’s top-end fabric. First the existing Kangchenjunga jacket, which we reckon is a cracking all-round technical mountain jacket stays in the range, but made from the new fabric.

Then, there may also be something called the Ulvetanna Pro Jacket, again made from new Gore-Tex Pro, it does without the other jacket’s pit-zips, has an off-set Vislon zip and a perforated chin-guard for easier breathing. It’s also, judging by the feel of it, massively tough. That face fabric is proper rough and durable feeling. There’s a removable snow skirt too, so you can plunge through powder without getting snow up your midriff.

Based on our protoype Arc’teryx-made Pro jacket, the fabric is seriously breathable and very impressive. The downside of that is that it costs a little more. The current Kangchenjunga, for example, is £300, the new one will be around £330.

There are packs too – more about those shortly – and the above are all available from around September 2013. You can find full details of the current Berghaus range at www.berghaus.com.

Scoop look at what's new from Rab later this year including water-repellent down and their lightest ever down jacket.

A scoop sneak preview of what's new from the big B later this year including a revamped Arete.

Montane gets NeoShell and super-slick construction for its waterproof shell jackets out later this year - here's what's coming your way.