If you’re not familiar with ISPO Munich, it’s essentially the place where all of the gear releases for the next winter season get unveiled. It’s massive. It’s exhausting. But there’s always some very, very interesting kit to see, and it’s where you can really understand what trends have set in or are on the way.

After a round-up from the most recent show?  Check out our ISPO 2020 highlights.

In the last five years, sustainability has certainly been on the agenda, and there seem to be new aspects of production tackled each time. This year, a lot of brands were championing their new recycled and recyclable products and materials, and as was the case during the OutDoor Show last summer, it seems plenty have stopped using PFCs for water repellency and are also carefully considering where they source their down from.

“The big news though, was the launch of a brand new type of waterproof, breathable fabric…”

At ISPO you also get a taste for what kind of activities people are getting into these days. This year loads of brands were focussing on ski mountaineering, with plenty of alpine packs, breathable, protective fabrics and synthetic insulated jackets on show. Trail running isn’t normally a focus at the winter show, but that was also certainly a notable aspect this time.

The big news though, was the launch of a brand new type of waterproof, breathable fabric. More on that below…

Just about every brand claims that their new waterproof jacket has high breathability, but it’s usually hot air. So when The North Face announced that they’d created a brand new type of fabric that was going to redefine waterproofing, we were sceptical. We’re a little less so now after actually seeing and feeling the material at The North Face’s massive stand at ISPO. It looks impressive, feeling lightweight, stretchy, and having a translucent, airy look to it There was also an interesting demonstration that showed Futurelight fabric and normal waterproof fabric alongside each other, with water sat on top of them and air being blown through both from underneath. Thousands of tiny air bubbles were bursting through the Futurelight, whereas no air came through the standard fabric whatsoever. It could be a clever ruse, who knows. But still, we’re now very, very keen to try this stuff out.

Last year we had the Patagonia Micro Puff jacket, this year from Patagonia we have the Macro Puff, a beefed up – though still light and lofty – synthetic insulated jacket. Plumafill features once again, but more of it this time. They’ve also lowered the hem and added two-way zips. The Micro weighs 264g while this comes in at around 420g.

“I’ve been hoping they’d release something like this,” commented one of our Instagram followers when we posted about Fjällräven’s new Singi collection of backpacks. Available in a number of different capacities ranging from daypack to expedition sizes, these G1000 backpacks are designed for personal customisation with daisy chain loops on the front and sides to allow you to attach a load of extra pockets and pouches which are purchased separately. Another nice touch is the Bergshell waterproof fabric that’s used on the base of each pack to protect your kit when you’re plonking it down on wet ground.

We saw a lot of new kit that uses Gore-Tex Infinium at the show this year, and the messages on it all seemed to be a little bit vague, as if it’s not quite been worked out just yet. We’re still getting our heads around it as well. In essence, it’s a replacement for Gore’s Windstopper fabric that supposedly offers a better, much more persistent water resistance and full windproofing.

Among the brands to adopt it as an ingredient in one of their new products are Rab who’ve used it in their new Infinity jacket. Designed for mountaineers operating at high altitude, it feels incredibly lofty and warm (in the conditions of the exhibition hall anyway), and it’s said to have an extremely high water resistance. There’s also a lighter version of it that we expect will go down well with the less serious outdoor punter. Two items we’re definitely looking forward to testing. 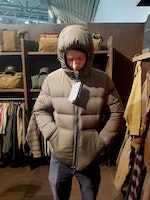 This isn’t a new one from Filson, but ISPO 2019 gave us the chance to finally see it in the flesh, and it looks great. It’s not necessarily a down jacket to go for if you’re looking for something to keep in your backpack, but rather it’s a hardy option for hunkering down in for a day out in the woods. The down has a high fill power of 850, and there’s a ripstop shell with tough reinforcements on the shoulders.

A new fast and light range of packs from Lowe Alpine. The Uprise 30:40 and 40:50 are alpine styled options that, despite having a stripped back appearance, still have plenty of tech, including 210D ripstop fabric, ice axe and ski attachment points, a roll top closure and a clever wet/dry divider. It’s good to see the harness that was used on the impressive Lowe Alpine Aeon (released last year) has been transferred to this as well – it’s simple and low-profile but holds so well. As well as celebrating 15 years of working with Mountain Rescue, the other story from Páramo for 2019 is the release of their new Duology fabric. It involves a two-piece Nikwax-treated layering system, with an outer ultralight shell and a close fitting fleece jacket that both combine to make for waterproof, breathable protection. Designed for use during high tempo activities, the key factor in their performance is the wicking ability of the fabrics, spreading moisture quickly and pushing it outwards, away from the body.

Vancouver-based premium brand Arc’teryx have modified their popular Norvan SL trail running jacket, adding an inner layer of synthetic insulation to the outer Gore-Tex ShakeDry waterproof system. ShakeDry, if you’re not already familiar with it, involves a membrane that has no face fabric, meaning a lighter weight, higher breathability and speedier shedding of water. It comes in black or black. There’s no way of dyeing ShakeDry shells (yet) so black’s the only choice.

The heritage, or retro-look, is the ‘in’ thing at the moment. That was certainly something we took away from ISPO, and there are loads of brands trying to tap into this, plenty of which have only been around for the last decade. Sprayway, on the other hand, have been around since 1974. Their new logo is actually one of their original ones, and this new Torridon waterproof is based on a jacket that they released back in the early 90s. In other words, it’s legit. And it’s a legit modern jacket as well, with a Gore-Tex membrane, full articulation, pit zips and a protective hood.

Outdoor Research’s Bitterblaze gloves, which are on the market now, feature PrimaLoft Gold fill on the back of the hand and a clever PrimaLoft Aerogel on the palm, making them seriously effective for winter mountain use. To demonstrate their capabilities, OR had us hold onto two massive ice blocks with one of their standard winter gloves on one hand, and one of these on the other. The difference was instantly noticeable. No wonder it picked up one of the coveted ISPO Gold Awards at the show.

A brand we hadn’t heard of before. We found Grüezi in a little booth tucked away amongst the towering stands of those big name brands. But they had one of the most interesting products we came across over the three days we were at the show. It’s a sleeping bag that blends down and wool together to offer effective, environmentally-friendly, anti-microbial insulation that’s lofty and surprisingly light. It’s an innovation that was rewarded with the ISPO Product of the Year Award. 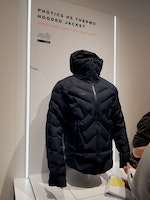 Swiss climbing brand Mammut have come up with the world’s first ever laser fused down jacket. What this means is that they’ve managed to isolate the down fill in the jacket into insulated compartments without the use of stitching or even adhesives. The ISPO Gold Award winner is also completely waterproof – but it’s limited edition, with only 500 set to be made. Mammut claim the Laser Fuse tech it uses ‘has the potential to revolutionise the production of down jackets’.

"This is a guy who can reach the locations where many others simply can’t..."

The Man Behind The SAIS | Nevis Faces

100% recycled and biodegradable. This new insulation is made with the planet in mind

Stop wasting time watching Friends on repeat and get stuck into these gritty adventure movies.