ISPO, in case you’re not familiar with it, is a big old gear tradeshow in Munich. All of the world’s leading brands (and all the rest of them…) head here to show off all the new gear they’ll be flogging come Autumn/Winter 202/21 and we go along to get you the scoop on what’s worth knowing about.

There’s always some kind of accidental theme to ISPO and the main one this time was sustainability – as has unequivocally been the case for the last seven years or so.

A few years ago, tackling cruelly-sourced down was one of the more common initiatives brands would talk about at the show, then things moved on to getting rid of PFCs and now, with a lot of those now gotten rid of from DWRs (though not completely), it certainly seems that recycling techniques are on the rise.

Then there’s the backcountry skiing thing. A few years ago ‘fast and light’ mountaineering was the trendy pursuit that brands were angling their products towards. Now it seems they’re all switching to ski mountaineering. There was a hint of this switch at the last ISPO show in 2019, perhaps the one before as well, but this time, at ISPO 2020, there were loads of ski jackets aimed at high aerobic activities in demanding environments and packs with all the bells and whistles.

It’s all wintry stuff at this show, anyway. If you want to know about the summery stuff that’s around the corner, it’s our Outdoor by ISPO Highlights you’ll want. So, without further adieu, here are all of the products that we impressed OM staffers Will, Jack and Giles during the three days we spent at the ISPO Winter show.

Dead Air Space, that’s what the DAS stands for here. It refers to Patagonia’s new collection of jackets designed for wet and cold conditions – the kind of weather you might expect when mountaineering in Scotland. Each one is filled with PrimaLoft’s Gold Eco insulation for excellent ‘warmth when wet’ and features an ultralight nylon ripstop face fabric with Fair Trade Certified sewing. Other news Patagonia had for us was that they’ll be relaunching their popular Nano Puff jacket with PrimaLoft Gold Insulation Eco and a tech called P.U.R.E which means Produced Using Reduced Emissions.

The North Face were the talk of last year’s ISPO when they launched their new FutureLight lightweight and super breathable waterproof technology, but this time there wasn’t anything quite as exciting as that from them. That being said, their main story, the launch of their Advanced Mountain Kit, is still pretty intriguing. It involves 21 new pieces and five new technologies all designed in complete collaboration with professional alpinists David Göttler, Herve Barmasse and Andres Marin. Perhaps the most interesting item in the collection was the Summit L3 50/50 Down Hoodie, a mid layer that’s designed to regular body temperature perfectly even in extreme conditions. This is achieved using a completely new way of constructing a down jacket, with a light air permeable outer layer and then a series of aluminised tubes underneath which are filled with extremely fine, weather resistant down.

OK it might look like a giant and partially soiled diaper, but look past that and what we have here is one of the most impressive eco-friendly innovations the outdoor industry has ever seen. A winner of one of the ISPO Gold Awards this year, it uses Parley Ocean Plastic which is created from upcycled plastic waste that’s been intercepted from beaches and coastal communities and it’s totally un-dyed to save water and energy. On top of all that, as it uses just one material (polyester) it’s also extremely easy to recycle.

While we’ve seen waterproof jackets from Rab in the past that have fitted the bill nicely when it comes to backcountry skiing, they’ve never actually released anything that’s specifically designed for the activity, so their new Khroma collection is a somewhat new direction for them. The Khroma Kharve GTX features two types of the new Gore-Tex Pro fabrics and uses 100% recycled materials for the ProFlex face fabric. Details include an arm pocket for a ski pass, chest pockets for an avalanche transceiver, a removable powder skirt and snow cuffs.

Within this collection you’ll also find the Khroma Kinetic, which uses their Kinetic Plus soft-to-the-touch waterproof fabric, and also a non-waterproof version of the Kharve. Mountain Hardwear revealed they’ll be releasing an updated version of their popular Ghost Whisperer midlayer jacket in AW 2020. At just 189g, it’ll be lighter than ever before, but no less technical. In fact, their new iteration will feature an impressive 1000 fill power RDS-certified down and bluesign approved fabrics. We’re looking forward to getting our hands on this. The big news from Osprey is that they’ve come up with their first set of avalanche bags. The Soelden (for men) and Sopris Pro (for women) feature an Alpride E1 Electronic Airbag system that can be fully deployed in around 5 seconds – we actually gave it a go at the show and can vouch for that speediness. It’s also super tough, fine for air travel and can be recharged quickly and easily via USB. What’s more, the battery isn’t sensitive to lower temperatures so you can rely on it to perform when you need it. The bags themselves are pretty smart looking too.

Lots of nice new down jackets from Swedish brand Fjällräven were unveiled at ISPO 2020, all of them inspired by a jacket founder Ake Nordin created with his own two hands back in the early 1970s. The main piece in the collection is the Expedition Down Parka which has two insulating layers, one with down the other with synthetic fibres. Other interesting new kit they showed off included a new addition to their Vidda Pro line (pictured above) made with recovered wool, plus a new version of the Greenland Down Parka and some great looking retro anoraks made from G1000 Eco Lite.

All of the OM team were digging the new Mackinaw Anorak that’s in the pipeline for 2020 from Pacific Northwestern outfitters Filson. It’s made using the full yarn and lanolin of a thick wool, making for a soft, warm, durable and naturally water resistant garment with a very heritage-inspired look. In other news, their women’s collection is continuing to grow, which is good to hear.

German brand Hanwag unveiled some new additions to their Banks collection at the show this year and the Banks Winter GTX was probably the most eye catching of them all. It features a footbed that contains a layer of aluminium that will reflect away any cold that’s radiating from the ground. In addition, micro perforations in the footbed collect and store warmth that’s emitted by the feet. Clever stuff.

This new evolution of Nikwax’s Hydrophobic Down can supposedly remain water repellent over 10x longer. Even after 7 days of constant exposure to water, tests have shown that it will be able to keep its natural structure and therefore maintain insulation. In fact, in something called the IDFB 18A Hydrophobic Shake Test, this new down managed to exceed 10,000 minutes of shaking in a jar full of water. 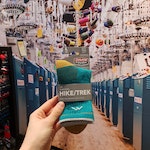 Darn Tough are a family run company that make socks specifically designed for outdoor enthusiasts. They only use ethically sourced merino wool and fully subscribe to the Responsible Wool Standard. What’s more, they offer a lifetime guarantee across their entire collection. We definitely liked what we saw when we stopped by their stand – the Hike/Trek Micro Crew in particular.

The Best Of The Rest At ISPO

What's our team's highest rated jacket this season? Watch this broadcast from Will's World to find out

For the secret to running further and faster, you might just want to look to the example of one woman from Brazil who seems to...

Ultra runner, Eco Warrior, Lawyer, Fighter | The Fernanda Maciel Interview
We use cookies on our website to give you the most relevant experience by remembering your preferences and repeat visits. By clicking “Accept All”, you consent to the use of ALL the cookies. However, you may visit "Cookie Settings" to provide a controlled consent.
Cookie SettingsAccept All
Manage consent