Quechua by Decathlon have created a ‘pop-up’ style tent that’s designed to withstand nature’s elements, one that uses unique patented technologies and that has a whopping total of 18,730 hours of research and development behind it (to be specific!) At £99.99, it’s also a bit more up-market than your everyday pop-up style, but still much less expensive than your average tent.

From camping in your back garden as children, to last-minute festival purchases; we’ve all used a pop-up tent at some point in our lives. And sure, they’re quick and easy and will suffice for the weekend. But what about longer and more arduous hiking adventures?

If you want a tent that is both easy-to-pitch AND capable of holding out against testing conditions, you’ll need something a bit more sturdy and a bit more transportable. Enter the 2 Seconds Easy Tent.

Inspired by the feedback of customers who said pitching was the worst part of camping, Quechua have created a tent that can be set up and folded away with minimal effort. They say that ‘there are better things to do on holiday than set up camp’, and aim to give you more time to spend in the great outdoors with your friends and family.

Related: Best Campsites In The UK

With innovative technologies and an eco-friendly design at the forefront, here’s a break-down of what the 2 Seconds Easy Tent has to offer.

The 2 Seconds Easy Tent comes in Decathlon’s trademark colours, including a light shade of Blue, and a ‘Fresh & Black’ option. The latter colour-way incorporates a patented blackout fabric, preventing any light streaming through your tent in the early mornings and even in broad daylight.

With dimensions of 205 x 145cm, and a maximum height of 110cm, it’s a tall enough tent to sit up in and the largest version has room for two 65cm-wide sleeping mats.

There’s also storage space in the porch for backpacks and a couple pairs of shoes and there are mesh pockets in the interior for accessories such as phones, head torches, battery packs, and other small items. Also in the interior is a cord running across the peak of the tent serving as a handy place to hang a lantern, or perhaps as an area to dry out your sweaty hiking socks. 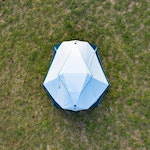 In terms of waterproofing, the flysheet has a water column of just over 2000mm, whilst the groundsheet is over 5000mm. The average measure of rain pressure is between 1000 to 2000mm Schmerbers (equivalent to a 1000 to 2000mm water column), so you’ll therefore have peace of mind in this thing. Each sheet additionally has a PU coating for extra protection and all seams are sealed with thermo-bonded tape for extra security.

Unlike standard pop-up tents, it’s also designed to be highly wind resistant, with an ability to withstand winds of 50km/h (Force 6). Quechua actually test all of their products on a rotating table inside a wind tunnel in order to check that each and every sample will be durable and reliable enough.

In terms of ventilation, the tent has two side doors for maximum airflow, as well as a mesh bedroom with mechanical air vents at the top. There’s also a little space in between the flysheet and the ground that enables that extra bit of condensation management.

Unique hinged poles are utilised here instead of the slotting ones everyone will be familiar with and these are connected via a system of hubs, cords and handles throughout the tent that all combine for an ingenious pop-up system.

To erect it, all you need to do is lift the tent out of the bag, unfold it, pull on the handles that lead out through the ports in the flysheet and the whole thing will miraculously take shape. All you need to do then is lift it to a flat spot and peg it down.

Related: A Beginner’s Guide To Wild Camping In The UK

6 tent pegs (12 are included) and 6 guy ropes are then used to secure it into place. For added security, the fly is secured to the poles using Velcro straps.

Though it doesn’t actually take 2 seconds to set-up, the process is remarkably quick compared to other 2-person or 3-person tents.

Then, once it’s time to leave, you simply remove the pegs and ropes, release the cords of the tent to let the sides fold together and you can then slip everything into the stuff sack, which, by the way, has a wide opening for easy storing, regardless of your shoddy folding techniques…

There are a few admirable eco-efforts involved in the production of these Quechua tents. The white part of the flysheet, for instance, is totally un-dyed, and the inside mesh, the groundsheet and the blue part of the flysheet are all dope-dyed, meaning that the colours are added during the tent’s manufacture, rather than after it has been yarned, thus resulting in a reduction in the amount of water, energy, and chemicals that are used.

Also, unlike many pop-up tents seen on the market, this thing’s made to last. In fact, Quechua incorporate a 5-year warranty for their products and offer an after-sales repair service to help make your tent last a lifetime.

At 4.7kg for the two-person design, the 2 Seconds Easy Camping tent isn’t the lightest option out there, though that’s understandably the trade-off for its ease of use. It therefore perhaps goes without saying that this isn’t for the lightweight backpacker, but instead it’s for the traveller who prioritises those handy perks and that ease of use over lighter, more fiddly kit. That all being said, its packed dimensions are an impressive 59x20x20cm so it’s certainly realistic as an option to carry in a backpack or strapped to the outside of one.

Get the latest price at:decathlon.co.uk

10 Of The Best Campsites In The Lake District

Looking for a trekking tent that’ll keep you sheltered through all conditions? This option, designed for the wilds of the Arctic Circle, will do just...

A very liveable solo backpacking shelter with a sturdy build and plenty of practical features – including the ability to pitch all-in-one for fast set-up...

Kelty Rumpus 6 Tent | Review
We use cookies on our website to give you the most relevant experience by remembering your preferences and repeat visits. By clicking “Accept All”, you consent to the use of ALL the cookies. However, you may visit "Cookie Settings" to provide a controlled consent.
Cookie SettingsAccept All
Manage consent