Ultra-running brand OMM (Original Mountain Marathon) has released what might be the world’s most breathable mid-layer. Billed as a ‘new concept in active insulation’, the Core Hoodie promises ‘near-total air permeability’ with ‘the warmth of a fleece but at less than half the weight’. Even the lightest breeze will create ventilation, enabling better thermo-regulation during your runs (or fast hikes). It all sounds rather extraordinary – but how does it work?

The Core Hoodie is made entirely from a PrimaLoft Active synthetic plume sewn onto a single-layer fabric mesh. Traditionally plume insulation is found loose between two outer layers. Here, however, the loose plume is knitted onto a single-layer mesh, creating an insulating layer at an insanely light weight – it weighs just 115g in the Core Hoodie (£90) version. That really is ultralight. A slightly warmer version, the Core+ Hoodie (£100) weighs 185g because it features more PrimaLoft Active insulation, while the Core Vest (£65) weighs just 72g. 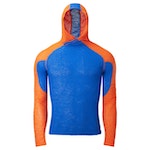 Of course, if wind can blow straight through the hoodie, then it won’t keep you that warm and the insulating properties will be compromised. Consequently, the Core Hoodie is specifically designed to be used in conjunction with a minimalist windproof jacket. As OMM tells Outdoors Magic: “Paired with a shell, the Core is an incredibly effective insulator, but – thanks to near-total air permeability – the lightest breeze can take away that heat. This allows you to keep your Core layer on even when you have warmed up and you can thermo-regulate by removing or unzipping your low bulk shell (such as the Sonic windproof at 48g). The Core Hoodie is a true valley-to-summit piece. It works wet or dry with incredible wicking properties to ensure you won’t stay wet for long.”

The brand goes on to further explain: “PrimaLoft Active weaves PrimaLoft fibres onto a mesh giving a super high volume and open structure. These fabrics insulate by trapping pockets of air that the wearer’s heat cannot pass through. Core structure is exceptional at creating these pockets. However, the openness also allows for a light breeze to disturb these air pockets and remove the insulation effect. Core uses this to its advantage; put a light shell on over the top for the best possible warmth-to-weight layer and then when you get too hot, adjust or remove only the shell and you can keep pushing hard to the summit without a bulky layer to stash.”

The Core Hoodie also features flatlock seams positioned away from shoulders, a soft-rolled hood and collar, a stretchy feel, and a reflective logo – but that’s all. Minimalism is the key here. The range is available in both men’s and women’s versions, in several sizes and colour options.

How To Choose The Best Trail Running Shoes For You

Lightweight and quick-drying options for hiking and running

Protect yourself from the sun with these caps

Best Trail Running Backpacks For 2022
We use cookies on our website to give you the most relevant experience by remembering your preferences and repeat visits. By clicking “Accept All”, you consent to the use of ALL the cookies. However, you may visit "Cookie Settings" to provide a controlled consent.
Cookie SettingsAccept All
Manage consent