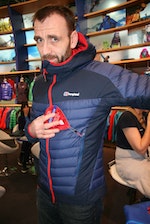 Fresh out of the recent ISPO trade show, here’s a quick look at what’s new from the guys at Berghaus later this year in autumn 2014 – that’s some time around September in outdoor industry world. As usual a brand as big as Berghaus has a whole bunch of new kit, but these are the highlights of the range.

Over the part couple of years, the launch of Hydrodown, Berghaus’s water-repellent down insulation, has been a huge theme for the brand with pretty much all its down jackets this winter using the stuff – it really works, we dunked a Furnace in the bath and it recovered astonishingly well – that carries on, but on the synthetic side of things, there’s more of the ‘Hydroloft’ filling first seen in the ultra-lightweight Hyper Therm Jacket due out this spring.

The other theme is body mapping based on the research the design team did in Greenland prior to Leo Houlding’s Ulvetanna adventure last year. In short, it means insulation is distributed strategically so it’s distributed exactly where it’s needed – over Leo’s feeble kidneys for example – with less elsewhere which reduces both bulk and weight.

The body mapping puts down where it’s needed – subtly different for men and women – and the down and synthetic areas also use different face fabrics, down-proof Pertex Quantum in the downy areas, Microlight in the synthetic ones with a DWR, water-resistant treatment on all the exterior fabrics. The synthetic areas are more breathable thanks to the choice of fabrics. A quick try on suggests that it’s impressively warm for the weight.

Other touches include an internally adjustable hood for smooth exterior profile. Claimed weight is 409g for the men’s version in a size large, women’s is 342g, and price will be £250. The Asgard Hybrid carries on in the Berghaus range, but is demoted to the ‘Mountain’ sector, while the Ulvetanna Hybrid will play for the Extrem first eleven. Or something like that…

The Ramche is Berghaus’s existing seriously warm, body-mapped hooded down jacket. It weighs in at just 430g and carries on in the range, but it’s joined by a new ultra-lightweight, micro-baffled and aggressively body-mapped little brother, the Ramche Hyper that registers just 169 grammes for a women’s large on the Berghaus scales or 179g for a men’s large.

It uses micro baffles stuffed with the same 850 fill Hydrodown as the Hybrid and has three different down fill levels with high fill on core areas like the front of the torso and spinal area, medium fill on, say, shoulders and outer sleeves and low fill under the arms and on the inner sleeves. Fabric is ultra-lightweight Pertex Quantum GL.

Think ultra-packable, low-bulk, sub-200g packable warmth. Price will be £230, so more than a quid per gramme of weight, but hopefully it’ll hit that crucial balance between being very light and actually warm enough to bother carrying. If you need more warmth, there’s always the 320g Ilam hooded down jacket.

Hydrodown means down isn’t as vulnerable to damp conditions as it used to be, but Berghaus also has a new pure synthetic jacket using the Hydroloft Elite Pro top-end insulation called the Capucin Hooded – synthetics are still arguably the best choice if you know things are going to be cold and wet.

The jacket has three external pockets, one internal one, and a hood with a Pertex Microlight outer. It’s part of the Mountain range and will sell for £160. Nice detail touches include cuffs designed to seal effectively by using a combination of internal elastication and external baffling. And further down the family tree, there’s a £120 Rannoch Jacket, part of the Trail range using the second tier Hydroloft Elite fill.

Finally on the clothing front, we think that there’s the  Smoulder Hoody Jacket. It uses Polartec’s excellent PowerDry High Efficiency, gridded fleece, is body mapped and comes with a bonded shoulder pocket. Great stretchy fabric that makes either a brilliant lightweight mid-layer top or can also be used as a cold conditions baselayer.

Finally, there’s a new smaller version of the MtnHaus developed Expedition Light 80 mountain pack called the Expedition Light 40 logically enough. It’s half the size of big brother, but uses the same technologies including removable back plate, lid and belt and super-tough Dyneema fabrics. The smaller capacity should also make it useable for more general mountain stuff as well as full-on expeditioning and alpine mountaineering.

Fully built up it weighs a claimed 1300g but strip out all the extraneous bits and throw off a cliff and it’s just 813g ready for that hardcore push to the summit of Scafell Pike. Looks good.

All the items above are available from September 2014 – current range at www.berghaus.com.

New from the ISPO outdoors show - what's new from NE-based Montane this autumn.

It's all about the 100th birthday and ultra lightweight insulation on Planet Haglöfs this year.

New this spring, Montane's Prism mixes PrimaLoft fill with Pertex Microlight fabric for what might just be the ultimate wet conditions sleeping bag.