Latest in our look at the new 2010 products due out early next year is
Meindl, the German brand with a reputation for producing some of the
best walking and trekking boots on the market.

Astonishingly Meindl has been around for no fewer than 326 years – yes,
really, over 300 years – as a footwear company, and is still run as a
family business by two brothers. Their range really is huge and growing
every year, but many of their products are evolving along the way as
well. 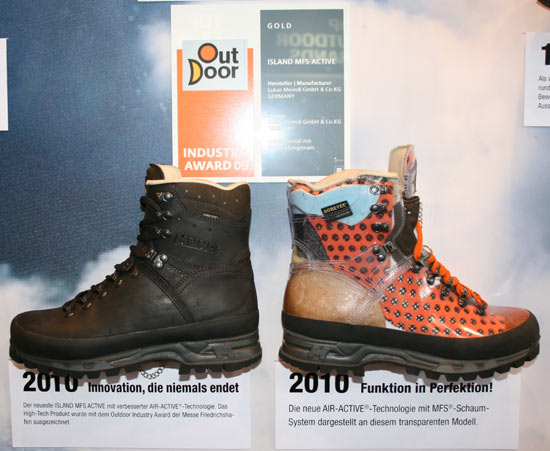 One good example is the Meindl
Island, which won a gold award at the show. The boot’s
been around for the last 20 years but now features reticulated foam to
increase breathability on a classic trekking boot. Price in the UK will
be £210. Brand new for next year is the Kansas
GTX – below – it will retail in the UK for £146,
features 2.7mm leather and uses Meindl’s own brand sole. Like other
Meindl footwear, it’s made in Germany still and, for those who dislike
waterproof / breathable liners, it’s also going to be available in a
non-Gore-Tex version. 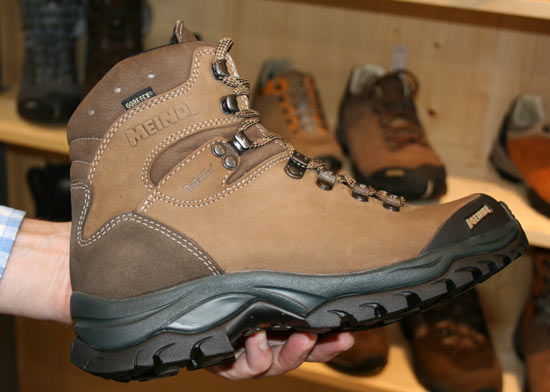 Also worth looking out for is the Meindl
Nepal MFS, which the company describes as a ‘proper
no-nonsense mountain boot complete with a full rand, leather uppers,
leather lining and a B1 rated sole unit for extended crampon use. Price
will be £200. The brand’s probably best known for traditional walking boots, but
around 30% of its range is now shoe based and for 2010 there’s also
a  lightweight mid with more contemporary styling called the Softline Ultra. It’s quite urban looking and has a Gore-Tex lining along with toe and
heel bumpers, plus weight has been kept as low as possible. Price is £145, we
think.

All the above available early 2010. Full Meindl details at www.meindl.de or see the UK
importer Bramwell International at
www.bramwell-int.co.uk

Not one but two new pairs of winter mountain boots coming your way for winter 2009.