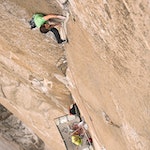 Jorgeson, 30, and Tommy Caldwell, 36, reached the summit of El Capitan after a remarkable 18-day assault of a route which many consider to be the toughest big wall climb in the world.

El Capitan has 100 infamous routes leading to its summit with just 13 of these having been free climbed before, but the Dawn Wall, which is three times the size of The Shard, is by far the most difficult.

The route has razor-sharp holds, it’s half a mile in length and out of the monsterous 31 pitches, five of these are as tough as climbing gets, let alone free climbing them.

If you’re not aware, free climbing is when climbers only use their fingers and toes to propel themselves up the rock, without the aid of rope. They are only attached to rope to stop them from falling.

Caldwell, who grew up climbing on Yosemite’s granite, is a well known figure in the park with 12 free climbs of El Capitan under his belt, so it’s no surprise that the man now residing in Colorado tackled the route in imperious fashion.

However, the younger of the two Jorgeson, a professional boulderer from California, is a lot less experienced than his compatriot and was pushed right to the limit throughout his first ever El Capitan free climb.

Despite five years of training and preparation for this challenge, it took Jorgeson an incredible seven days to complete just one pitch,15, watched on by thousands of supporters below.

Despite the stress both men were put under, they managed to stay in contact with the outside world via social media and following his accomplishment of pitch 15 on Sunday, Jorgeson wrote on his facebook feed:

‘Momentum is a powerful force. When it’s on your side, everything feels a bit easier. When it’s not on your side, it feels like wading through mud. For 7 days, my momentum was halted by Pitch 15,’ Jorgeson said.

‘It took everything in my power to stay positive and resolved that I would succeed. Now that momentum has returned to my side, I’m staying just as focused and resolved because a lot of hard climbing remains. Yesterday I finished the last 5.14 pitch and another 5.13 pitch above that.

‘Three more 5.13’s guard my path to Wino Tower. Thanks for all the continued support everyone! #DawnWall Photo/@coreyrichproductions @bigupclimbing @adidasoutdoor.’

A quick preview of what's new from Salewa for spring and autumn 2015.

Lightweight Haglöfs Essens Mimic looks like a down jacket, but is actually synthetic.

We find out what's new for the UK's leading outdoor gear specialist in 2015.