You might not have known it yet (apologies if you did) but this is going to be the year that you take on a long-distance walk. You’re going to look through this list, read about just how much adventure opportunity is out there and think, oh yeah, that does look a lot of fun – in fact that looks fun and it could be much cheaper than a normal holiday as well actually.

Whether it’s England, Scotland or Wales, there are long distance trails galore here in Great Britain, not just the well-known national trails, but loads of other lesser and little-know ones as well. All kinds of distances too, from mammoth ones that will keep you occupied for months right down to short and sweet ones that’ll require as little as two days of annual leave from work.

The routes below are all mapped out on komoot ready to be followed on the komoot app. If you’re new to komoot, for a free regional bundle (worth £8.99) simply follow this link to komoot.com and create your free account today.

One of my favourite long-distance trails in the UK is the Pennine Way National Trail, which I hiked in June 2019, starting in Edale in the Peak District and finishing approx 268 miles later in Kirk Yetholm. It’s not the longest one the UK has but it’s known as one of the toughest due to how remote some of the stretches are, and this is one of the reasons I loved it.


I was totally blown away by how beautiful the trail was, with stunning and surprising scenery along the way, including waterfalls, hills and lovely little villages where you can resupply. I’d recommend it to anyone who fancies a long-distance challenge, you’ll get to walk through three national parks and one AONB so there’s plenty to love about the walk.

Chosen by James Forrest, author of The Mountain Man (jamesmforrest.co.uk)

The 73-mile Cumbria Way – which traverses the country from Ulverston in the south to Carlisle in the north, via Coniston, Langdale, Keswick and Caldbeck – is a stunning low-level trail. The middle section through the heart of the Lake District is superlative.

The jagged skyline of the Langdale Pikes, the achingly pretty Tarn Hows and the charming western shores of Derwentwater are but a few of the many highlights. It’s a walk that proves you don’t have to bag mountains to relish the beauty of the Lakes.

A popular hiking trail, the West Highland Way must be one of the most social routes to hike in the UK, with many common spots to stop along the way and meet fellow hikers.

The West Highland Way an incredibly varied route; starting in the suburbs of Glasgow it then follows right along the length of Loch Lomond before passing through the ‘Gateway to the Highlands’ and finishing with the jaw dropping scenery that leads to Fort William and Ben Nevis. I love the rugged terrain you encounter on this journey and the fact that the trail is well-marked and easy to follow.

Offering panoramic views, bucolic countryside and some of the most charming little villages in England, Shropshire is a great place to stretch the legs. Walking the Shropshire Way will take you from the iconic Stiperstones in the Shropshire Hills to Wenlock Edge, Ironbridge Gorge and the Wrekin – and that’s just the southern loop. This long, figure-of-eight trail also traverses the great Shropshire plain, a landscape of meres and mosses that are amazing havens for wildlife. I spotted dozens of buzzards overhead in the course of just a few days.


There’s plenty of history and heritage on offer too, from the castles of the Welsh marches to the iron heritage of Coalbrookdale and Ironbridge, birthplace of the Industrial Revolution. At nearly 200 miles in total, doing the whole thing is no small undertaking, but it can be split into sections and is easy to follow too – in fact, there’s a great website (shropshireway.org.uk) with downloadable route guides.

Chosen by Will Renwick, editor of Outdoors Magic

They call this the “mountain connoisseur’s walk” and for good reason. It’s a 298-mile route that starts on the south Wales coast and finishes on the north Wales coast, taking in just about all of Wales’s mountains in-between – mountains like Snowdon, Cadair Idris, Pen y Fan, Rhinog Fawr and Pumlumon.

When I walked it a few years ago over the course of 18 days, I loved how the route seemed to locate the wildest parts of Wales. At times, I really felt like I was on an expedition. Bear in mind that at the moment, the way-marking along it is basic, so you’ll need to brush up on your nav skills before taking this on. 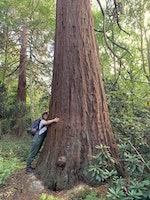 The London Loop is the walkers’ M25; a trail that circumnavigates the capital in a 150 mile ring divided into 24 sections. One of my favourite things about it is that each section is planned for you to get there and back using public transport – figuring out the TfL routes is almost as fun as navigating the Loop itself. It takes you through a mixture of ancient woodland, bucolic countryside and industrial edgelands. Highlights include London’s longest pier at Erith (the official starting point of the Loop), the ‘Wilberforce Oak’ where William Wilberforce resolved to abolish the slave trade in Britain, several groves of giant sequoia trees, the aptly named ‘Happy Valley’, and the ending point at Rainham Marshes where you’re reunited with the Thames. After doing the Loop I’ll never see London in the same way again.

With its wild mountains, deep green valleys and unshakeable mysticism, Snowdonia National Park has to be one of the finest parts of the UK, and this walk – the 83-mile Snowdonia Slate Trail – is the best way to see it.

The Slate Trail is a young path, officially opened as recently as 2017 and it would be fair to say it’s still a little bit under the radar, not yet having managed to build up its own notoriety just yet. I can definitely see it getting very popular though. I walked it over four or five sunny days a couple of years ago and remember swimming in rivers each day and having an idyllic camping spot each night. Don’t be put off by the fact the route is designed to take in the area’s industrial heritage. Think crumbling chapels made from purple stone and rusted antiquarian machinery smothered in green ferns, instead of concrete chimneys or burnt out nuclear reactors behind barbed wire fences.

The Coast To Coast

The Coast to Coast is hands down one of my favourite long distance walks in the UK. I’ve hiked it twice now and every time relished in the feeling of freedom and satisfaction gained from walking from one side of the country to the other.

Starting in St. Bees on the west coast, the route heads into the Lake District National Park then works its way through the Dales and on to the North York Moors, finishing on the east coast at Robin Hood’s Bay. It is a walk of mountains and moors, forest and rivers, coasts and farmland. It is certainly one not to miss for anyone looking to enjoy some of the wilder spaces of our country.

The reality is that those trails mentioned above make up just a snapshot of what’s out there. There are plenty more popular paths that deserve to be mentioned, like the Cape Wrath Trail and Skye Trail in Scotland, for instance, or the Pembrokeshire Coast in Wales and South West Coast Path in England. There are Northern Ireland’s options as well, most notably the 625 mile Ulster Way (time for that sabbatical?).

Don’t forget those tucked away ones either, there are little-known trails all over the UK – hundreds of them.  Komoot is a very handy app for finding trails in your local area, throughout the UK or even globally and you can use their app to navigate each one when you’re out on it as well. You can even use it to make up your own long distance route, as our editor Will did when he ran from one side of the New Forest National Park to the other. You can watch that adventure in the video below.

Best Walks In The Brecon Beacons

The 10 Finest Walks In Cornwall

From half-day jaunts to multi-week adventures; here's some of the best walking routes in Cornwall.

A Pint With A View | The Lake District's Best Pub Walks

There’s nothing quite like a pint after a long day’s hike. And where better than in amongst the glorious Lakeland fells?

Get ahead of your post-lockdown holiday planning with this expansive list of some of the best hiking locations Europe has to offer.

Best Hiking Destinations In Europe | Preparing For Post-Covid 19 Long-Distance Trekking Adventures
We use cookies on our website to give you the most relevant experience by remembering your preferences and repeat visits. By clicking “Accept All”, you consent to the use of ALL the cookies. However, you may visit "Cookie Settings" to provide a controlled consent.
Cookie SettingsAccept All
Manage consent