Having already conquered 5 of the 14 different 8000m peaks on Earth, David Goettler is one of the most admired and technically skilled alpinists in the world.

He has reached the summits of Gasherbrum II (8035m), Broad Peak (8051m), Dhaulagiri (8167m), Lhotse (8516m) and Makalu (8481m), and has even ascended 8200m on K2 (8611m). Most impressive of all, however, is the fact that David does all this unaided and without the support of supplementary oxygen. This is described as the purest form of alpinism and is incidentally one of the most difficult. Indeed, just this year he and fellow climber Kilian Jornet attempted to summit Everest without bottled oxygen but made the decision to turn back just before 8000m. Suffice to say, it’s no small task. 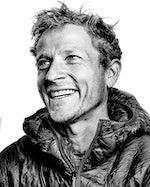 What’s also unique about Goettler’s mountaineering style is how quickly he climbs. He’s fast and light on his feet and has previously summited the likes of Shishapangma’s South West Face (8013m) in just 13 hours. It’s partly thanks to modern training techniques that this is possible, but according to David, it’s also much to do with recent innovations in alpine apparel such as The North Face’s Advanced Mountain Kit (AMK).

Otherwise known as ‘the pinnacle of mountaineering’, the AMK is a six-part layering system that’s been field tested by pros such as David, as well as athletes Hervé Barmasse, Hansjörg Auer, David Lama, Andres Marin and Jess Rosskelley. It’s significantly lighter than most alpine kits, and features some incredible new technologies to help athletes reach summits at speeds never before thought possible.

Related: Mid And Base Layer Reviews

In between his adventuring and high-alpine pursuits, we got the chance to speak to David about what The North Face’s new AMK collection means to him, how he helped develop and test the kit, and what the future holds for mountaineering.

For our readers who aren’t familiar with your background, can you describe how you got into mountaineering?

I started climbing and exploring when I was young, with my parents. At the age of 7 we went multi-pitch climbing in the mountains close by Munich, and we always travelled to very exotic places during our holidays – the Sahara desert, Morocco or Iceland. All in a 4×4 car and never sleeping in a hotel.

“Climbing is about preparation.”

Do you get this feeling in any other aspects of your life (i.e. other than alpinism)?

The feeling of that pure and direct sensation when you’re in the mountains is very unique. I think you find it often when it’s just you and the nature. But you never find that when you’re distracted in life, like in a team sport for example.

What inspired you to choose this path not only as a passion but also as a career?

Maybe I was inspired unconsciously, but I’d have to say my father. I never said I wanted to become like him nor did I have those big idols I wanted to follow and be like. I think I just found it very satisfying and felt most happy when I was out battling the elements, or out climbing. And when it became my profession, it was very slow and gradual – a healthy process.

What has been your most challenging climb to date and why?

Maybe Everest. Because that mountain has made me turn around a couple times. At the same time, I learned a lot from my attempts and hopefully with that knowledge and a bit of luck, my dream of climbing it in my own style, without oxygen canisters and porters will happen one day.

Have you ever had many extremely close calls when mountaineering? How do you remain calm?

For sure, I’ve had some of these moments. But I try to avoid them. Mountain climbing is about preparation. You plan for various situations that could occur so that if they do – you not only have a route out, but you’re able to recall that route when under pressure. Knowing I’ve prepared for possibility A, C and B makes life that much more relaxing!

How does The North Face’s AMK compare to the kit you’ve used before?

It’s very different. AMK is such a personal project for me because I’m invested, you know! I know why the pocket placement is where it is and I know exactly the reason behind the fabrics used and just how important it is in 8000m+ environments. It’s just a huge step in the world of mountaineering.

I’ve found that it really does help me move faster. It’s kit that really supports the way I climb and is designed to help me push my limits without any unwanted baggage.

Every product is exactly how I want to be. But my most favourite thing is that it’s a whole kit, with layers working together which are designed to go hand in hand with each other.

What can we expect from you in the future?

I hope for many more years of roaming around the highest mountains, and to continue fine-tuning my approach to a light and modern style of climbing these giants.

If you’ve got some extra time, it’s also well worth checking out the speaker series below for more info on the AMK’s birth and development, including how it fared on one of David’s recent Everest attempts.

The Best Winter Walks in the Lake District | Routes

An urban take on the original expedition kitbag, made from recycled fabrics with an eco-friendly water-repellent finish

The North Face Base Camp Voyager Duffel | Review
We use cookies on our website to give you the most relevant experience by remembering your preferences and repeat visits. By clicking “Accept All”, you consent to the use of ALL the cookies. However, you may visit "Cookie Settings" to provide a controlled consent.
Cookie SettingsAccept All
Manage consent