“There’s a fish there,” our guide Tommy said quietly to us after suddenly coming to a stop on the trail. A slight ripple showed on the surface of the lake. “Let’s stop for a second – I’m going to try and get it,”. With a quick flick of the wrist, he cast his line into the narrow creek. It took just three seconds before he was hauling his rod backwards, its carbon shaft arching towards the sky. ‘Yes, I’ve got it – it’s a big one,” he told us excitedly.

Less than an hour later, we were sat in a clearing within a wide mountain wilderness as the orange flesh of the brown trout he had so simply plucked out of the water cooked away over a camping stove in a deep pool of butter.

This turned out to be one of many unique experiences we gained up on the mountain plateau of Fulufjället National Park. Over the course of just two days here we slept in remote cabins at nearly 1000 metres, we took saunas followed by ice cold swims in a still lake, we visited ‘the world’s oldest tree’ and Sweden’s highest waterfall too. I’ve travelled around a lot of Sweden and while I’ve loved almost every part I’ve been to, this national park really did leave an impression on me. If you’re looking for a wild adventure that can be had over the course of just a long weekend, this, I’d say, should be pretty high on your list.

Where is Fulufjället National Park

Fulufjället is located on Sweden’s border with Norway, occupying a section of the northwestern corner of Dalarna, a large county that stretches right across central Sweden from the Norwegian border over to the east of the country.

The Park In a Nutshell

Fulufjället National Park is a wild and untouched nature area spread across the 1,044m mountain it takes its name from. This mountain rises in the landscape as a plateau that has steep sides and a broad flat top. No reindeer graze here, so the mountain heath is covered with a thick carpet of lichen. On the lower slopes ancient trees, waterfalls and boulder fields give the park a real alpine feel.

In summer, it’s green and quite verdant, with a thick blanket of cloudberry bushes coating the landscape, paddle-able lakes and gurgling brooks everywhere. At this time of year, many hikers pass through each day on their way along the Southern Kungsleden, a 360km trail that has its southern terminus just south of the national park.

When winter rolls around, expect deep, deep snow and hard frozen lakes. You’ll also need either snowshoes, cross country skis or a snowmobile to get around at this time.

Our trip to Fulufjället started at Naturum Visitor Centre where we met with our guide Tommy Lönnebake. From there he led us for around 3km up to the remote mountain station of Rösjöstugorna which he has been running for the last few years.

There are numerous cabins here and two luxury tents (ecoadventure.se) and it’s situated right in the middle of the mountain plateau where there are incredible views across a lake towards distant mountains. We spent two nights here, one in a cabin and the other in one of the tents.

Rösjöstugorna isn’t a hotel, it’s the kind of place where you need to cook for yourself and clean up after yourself too, and the toilet situation will be familiar to anyone who’s been to a music festival or two. There is, however, a mighty fine sauna that guests can use – so long as they’re prepared to chop their own wood for the burner.

The next day, Tommy, armed with a fishing rod in his right hand, took us on a 20km hike along a marked trail to his favourite part of the mountain, which he calls the Green Side. Along the way, we stopped multiple times to have speculatory casts into lakes and creeks – the area is, after all, famous for the abundance and quality of arctic char and also brown trout.

Once we’d caught something that Tommy deemed large enough to eat, we made our way to a lonely hut in a place called Lorthån, where we got a stove burning and a fleshy fish frying.

This Green Side, Tommy told us, is home to elk, wolverines, wolves and even bears. All we saw, sadly, were lemmings. And lots of them.

On our last day at the park, we were taken to see the two main showpieces of Fulufjället. First was Old Tjikko, which is reputed to be the oldest tree in the world. Now, according to Google, the title of world’s oldest tree is contested by a number of specimens around the world. Old Tjikko, as Tommy explained to us, is a clone of a tree that first began growing over 9000 years ago. You see, with spruce trees, if a branch reaches the ground then new roots can grow from it – so a tree can spawn multiple others in its life. So it’s kind of the oldest tree… and kind of isn’t.

From Old Tjikko, it’s then only a short walk to Sweden’s highest waterfall, Njupeskär. With a total height of 93 metres, a free fall of 70 metres and tall cliffs flanking it on either side, it really is a spectacular sight. Tommy told us he goes there at midsummer at 3am every year as it’s the only time when the whole waterfall and its limestone cliffs are turned a glowing red by the rising sun.

Winter and summer contrast hugely in this part of the world. We visited in early June, when only patches of snow remained on north facing slopes and the lakes were just about warm enough to swim in without feeling like you’re taking part in some kind of special forces challenge. There were a lot of mosquitoes during our visit, but none of them were biting and they didn’t cause any irritation.

From the beginning of October to the start of May, there can be a lot of snow over the national park, and that’s when the area becomes a paradise for cross country skiers, snowshoers and for snowmobiling.

Autumn is said to be a spectacular time to visit, with the ancient forests taking on spectacular colours and a lack of crowds enhancing the overall tranquility of the area.

How to Reach the Park

We reached it by driving for around five and a half hours from Stockholm Arlanda airport. Oslo airport is actually a bit nearer though, with the drive time from there taking around three and a half hours. Särna, the nearest town, runs buses to the park’s visitor centre, which is called Naturum. We broke up our drive to Fülufjallet with a stop off at Lake Orsasjön, where we stayed in the traditional log cabins at Smidgården and spent a morning hiking part of the 340km Siljansleden trail that goes right the way around Lake Siljan. 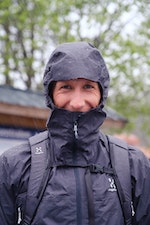 To discover more about the Dalarna region itself, and the hiking opportunities here, head over to visitdalarna.se/en. Fishing and drone flying is by special permission. Visit nationalparksofsweden.se to explore the rules and regulations.

The Swedish outdoor brand Haglöfs actually has its origins in Dalarna. It’s where, from inside a small cabin, founder Wiktor Haglöf created his first product. Haglofs.com is your one stop shop if you’re interested in the innovative L.I.M kit that I wore on this trip.

Beauty, camaraderie and whisky. We sent one of our readers on the trip of a lifetime...

The 10 Finest Walks In Snowdonia

The highlights of North Wales's national park, according to OM writer Will Renwick

Here are our favourite new outdoor and adventure books that are guaranteed to inspire...

We were given an exclusive insight into what's to come...

Highlander Lake District | 10 Things To Know About The First UK Event
We use cookies on our website to give you the most relevant experience by remembering your preferences and repeat visits. By clicking “Accept All”, you consent to the use of ALL the cookies. However, you may visit "Cookie Settings" to provide a controlled consent.
Cookie SettingsAccept All
Manage consent