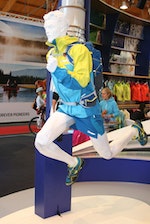 The Berghaus stand at OutDoor last week was fronted by an eye-catching animated dummy clad in the award-winning Vapour Storm waterproof jacket, but there’s a whole Vapour Light collection of lightweight trail-running kit along with a bunch of other new kit.

We’ve already covered the award-winning Vapour Storm Jacket in fair detail and used it too – it’s a radically vented Gore-Tex Active Shell top aimed at mountain runners and other fast movers, but there’s more in the same vein under the collective umbrella of the Vapour Light collection.

Like the jacket, the kit is aimed at runners specifically and fast and light folk in general – bikers, light-hikers, gramme-counting climbers and the like. There are Vapour Overtrousers to match the jacket, and again they use Gore-Tex Active Shell to give a light but breathable shell pant complete with water-resistant 3/4 zips for easy use.

Then there’s the Vapour Windshirt, the lightest ever windproof top from the brand at 99g for men and 90g for women. It’s made from own-brand AF fabric and is – despite the weight – fully loaded and comes with hood, underarm venting, thumb-loops and a chest pocket which doubles as a stuff-sac.

Also in the collection are Vapour Baselayers – these use an Argentium stretch fabric for a close, efficient fit with no restriction on movement and incorporate a permanent Polygiene anti-mirobial treatment within the fabric to stop you smelling.

There are packs too, three of them sized 32, 20 and 15 litres and aimed at those doing ‘high energy’ outdoor sports – wasn’t ‘high energy’ a genre of disco music, your honour? Anyway, the Vapour 32 is aimed at multi-day adventure racers and strips down from 803g to a mere 639g in minimal spec. Fearures include a new HALO compression system, external hydration slot for easy refilling and a ‘speed access bottle pocket at the base’.

The 20 is similarly specced but with a roll-over top closure while the Vapour 15 is a single-day event pack and, erm smaller again. They look pretty good in the flesh with all the stash and carry facilities you’d expect.

Finally, the new Vapour Claw trail-running shoe is a full-on off-road running and race shoe which Berghaus says has been developed for races like the multi-day Attacama Crossing or the imminent Dragon’s Back Race. It features semi-curved sports lasting, a  OPTI-STUD® Trail sole with grippy omni-directional 5mm lugs and a modified ergonomic holding system for a customised, secure fit, it says here.

The collection has been developed and tested with Berghaus-supported athletes like Philippe and Anna Gatta who used  prototypes of key styles during the Attacama Crossing desert race in Chile, and Helene Whitake and Stephen Birkinshaw, who are being supported by Berghaus in the Dragon’s Back Race along the spine of Wales.

New boots and the brand's first ever specialist trail-runing shoe from the Italian footwear specialist in spring 2013.