Things went badly wrong on my last Snowdonia adventure. My plan had been to head off straight after an event I was speaking at to seek out a bothy in the mountains. But things overran and I ended up arriving at the start of my walk in pitch black. It was also terrifyingly windy with a storm roaring through the Carneddau mountains.

Still, I set off. The bothy was several miles away and up high, but the further I walked the more I began to doubt how wise this was. Eventually, after a gust nearly knocked me off my feet I decided to be sensible and pitch my tent in a sheltered spot rather than push on.

I felt somewhat proud of myself for being rational rather than foolhardy. That was until I opened out my tent and realised I hadn’t packed the pegs. What an idiot.

Fortunately, I hadn’t walked that far, and could retreat back to a hotel I’d spied at the start of my hike. The next day I returned home with both my dignity and wallet slightly dented.

These wake up calls are good though; they’re all lessons learned. On the way back from Snowdonia, that failed night got me thinking about what other mistakes I’d made with my gear, and subsequently learnt not to make again. I thought I’d list a few of these here – perhaps they’ll save you from making the same mistakes. Or maybe you’re not so foolish…

[1] That fancy stove set and variety of ingredients are useless without the most basic part of your meal – a lighter (or matches).

[2] Then there’s the second most important part of a meal not to forget – a spoon or fork. Batcherlor’s Pasta n’ Sauce isn’t particularly enjoyable to start with, let alone when you’re eating it with a soggy bit of cardboard that’s been fashioned into a spoon. 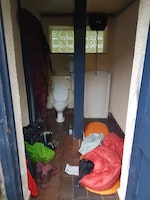 [3] Even if it’s a calm evening, try not to pitch your tent in an exposed spot. A storm might suddenly move in and blow your tent down. The public toilet at the foot of Cadair Idris is not a nice place to have to relocate.

[4] Outer chest pockets on a waterproof jacket won’t always stop your phone from getting soaked and dying in the middle of nowhere.

[5] It’s definitely possible to ruin a brand new pair of walking boots after just one use if they’re not cleaned properly.

Related: Staying Safe In The Mountains

[6] No matter how long your sunglasses are stashed in the top pocket of your backpack for, if they’re not in a case they’re going to come out with a thousand scratches.

[7] Don’t leave your waterproof jacket on a hot radiator. That membrane will melt away and you won’t notice until the next downpour you’re caught in.

[8] Simple one. Tie on that backpack rain cover or lose it.

[9] Your jacket might be waterproof, but if the hood won’t hold up in the wind then that down puffer underneath is going to be like a sponge when the rain arrives. Also, there’s only so much a buff can do to rectify the situation, as demonstrated in the image above of me looking like a grandmother waiting for the bus to Tesco.

[10] Make sure the levers on your trekking poles are tight. A single collapsed pole during a descent of Pen yr Ole Wen will send you flying, for sure.

[11] Don’t delay with getting your waterproof overtrousers on. A saturated pair of hiking trousers could chafe so badly on your thighs that you could end up driven mad enough to walk six miles along the Anglesey coastal path in just your pants.

Want to get as much outdoor time as possible out of your weekend? Try the Gower peninsula

Best Things To Do On Gower | Outdoor Guide