With Berghaus launching their new Air Flow Pro suspended air back packs for next spring, 2010, we thought it’d be interesting to run a quick overview of the different variations on the air-vent back system theme and their strengths and weaknesses as well as the pros and cons of ventilated back systems.

Mesh back panels hold the main body of the pack away from your back and allow air to pass over it cooling and venting as it goes. That means a cooler, less sweaty back and a more efficient physiology in warm conditions as there’s more surface area available to lose heat from.

What’s Not So Good?

The air gap means the load is carried further away from your back, which in turn can mean you can feel the pack levering away from your back. To accommodate the back system, pack makers end up with a long, thin, sometimes curved packing space making them deceptively low in volume and awkward to pack. 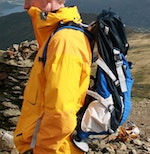 Mesh isn’t quite as breathable as you might think, a lot of it is still solid nylon or whatever, so it may not be as cool as you think it should be. Plus in cold conditions, wind can get at your back making for a cold, chilled feeling.

Finally, the systems can be weighty thanks to tensioned plates and rods needed to hold the load away from your back and the mesh.

To sum up, good in hot conditions but potentially less so when it’s cool and with some inherent weaknesses that need dealing with, which is what the leading brands have been doing.

The original Atmos was the first ventilated pack we really got on with. It used mesh tensioned across a flexible space frame that flexed with your back and shoulder movement and transferred load brilliantly making for a great carry with no feel of leverage from the load.

The second generation of the Atmos has a modified Airspeed system with far less flex in it and a LightWire alloy frame backed up by a tightly tensioned mesh back panel. The frame extends round the hips for better load transfer and cross struts across the frame hold things stiffer and control the flex, which gives a shallower air gap which is better for stability. There’s no internal plate, it relies on tension from the frame which makes it relatively light.

The sides aren’t completely open, but crescent-shaped holes allow reasonable side ventilation. Carries well, though the hip area can be problematic if you’re shaped wrongly. Venting not quite as good as some.

Lowe Alpine makes some excellent and innovative packs, interestingly, they developed a meshless system where two blocks held the pack off the back giving an uninterrupted air gap. Gregory is doing something similar for 2010. 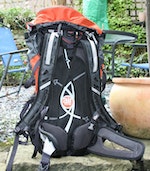 The company went back to the trampolene model last year though with the AirZone system. This uses a stiffened plate supported by an internal alloy frame, which you can’t see, but again stiffens the back meaning Lowe can get away with a smaller air gap thanks to increased stiffness.

The mesh area itself has been minimised  with big cut-outs allowing air to get straight to the back with no mesh in the way. Finally an adaptive  hip-belt caters for variations in hip shape.

It’s a well developed system that carries very well and still gets as much air to the back as possible. Narrow air gap means better internal space and minimal leverage when loaded up.

We used the new FreeFlow Pro system at its launch in the Lakes last week. The standard Freeflow uses flexible glass fibre / Delrin struts which mean the air gap is easily compressed as the back plate flexes. To prevent that happening, the new Pro uses a Nylon backplate reinforced with two strong alloy tubes.

This means Berghaus can make the air gap smaller, so in turn, the pack sits closer to the back for increased stability when loaded up. Like Lowe Alpine – and Deuter who originated the concept – Berghaus has removed some of the mesh to reduce contact area with the back. Finally it too has a hip-belt that adapts to body shape.

At the launch we found it carries extremely well and unobtrusively and there was no leverage even when scrambling. Finally, as promised the air gap was relatively small, but still effective.

At the recent Friedrichshafen OutDoor trade show, Gregory was showing off its new back system which, like the discontinued Lowe Alpine technology. Dubed Jetstream LTS, it uses a curved back plate and alloy frame, but no mesh. The end result is a full air gap across the centre of the back. We haven’t had a chance to use it yet, but bearing in mind the deceptively limited breathability of mesh panels, it looks like an interesting development and we’re looking forward to trying it out.

The main brands are getting better and better at ventilated packs and minising the downsides by reducing air gaps, increasing air contact with the back and improving load transfer generally. All the systems we’ve looked at work far better than earlier versions.

Our advice would be to try with a loaded pack before buying. The Osprey system works well, but isn’t cheap and has the edge for lightness while the Lowe Alpine and new Berghaus packs share some similar features.

The Gregory, once it – like the Berghaus – is available in 2010 should make for an interesting alternative to the mainstream options.

Everything you need to know about trail running shoes for both walking and running.

Trail Running Shoes | Buyer's Guide
We use cookies on our website to give you the most relevant experience by remembering your preferences and repeat visits. By clicking “Accept All”, you consent to the use of ALL the cookies. However, you may visit "Cookie Settings" to provide a controlled consent.
Cookie SettingsAccept All
Manage consent