Why We Chose The On Running Cloudvista Trail Running Shoe: Responsive, cushioned, comfortable

Founded by former professional athlete Oliver Bernhard and his friends David Allemann and Caspar Coppetti, On has (quite literally by looking at the size of some of their midsoles) ballooned in recent years. Built around a basic concept of a shoe that holds a cushioned landing yet still retains a firm toe off, the shoe has quickly been embraced by the running community – you’ll even find fellow Swissman Roger Federer lacing into a pair on court.

The On Running Cloudvista is a new shoe for the Swiss-based company, and it shows their appetite to continue to eat into the ever-expanding trail running industry, following the relative success of the Cloudventure range.

Who Is The On Running Cloudvista For?

The Cloudvista is a trail running shoe that’s been designed to offer that now classic On midsole cushioning while remaining responsive and agile enough for short to medium distance runs.

So, the first thing to think about when you’re talking about any On shoe is, of course, that very unique outsole design. The brand is defined by their ‘Cloudtec’ midsole technology, and it lives on in the Cloudvista. The technology makes use of a series of U-shaped blocks of soft, yet responsive, ‘Helion’ foam. These blocks have been hollowed out to both reduce weight and increase the amount of cushioning.

The CloudTec features a channel down the middle of them to allow the outsole and midsole to flex in a range of directions. This flex means that, depending on the way you strike, you’re always going to get a consistent strike and toe off. Speaking of toe offs, the Cloudvista features a 7 mm heel to toe drop which leads to a good deal of rocker to roll off – especially when combined with the highly responsive midsole.

Aside from the unique midsole unit, the On Cloudvistas have been designed to be lightweight yet still protective. This is thanks to a main upper that’s been built from 70% recycled polyester, a perforated tongue to keep things airy and breathable and a TPU mudguard that’ll be able to shrug off any rocks and roots. 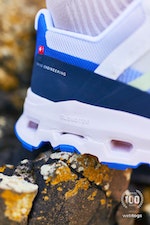 Taking a quick look at the outsole, the Cloudvista features a MissionGrip sole unit that’s been designed with trail running in mind. Saying that, they’re not the most aggressive of lugs, so we’d keep the shoes to reasonably hard-packed trails.

“I’ve been wearing the Cloudvistas for the past couple months, through a variety of terrain, and they’ve performed excellently. The classic On midsole does take some tuning in as you run, particularly if you’re coming from lightly cushioned trail shoes, but your knees really will thank you when you’re miles deep into the trail. 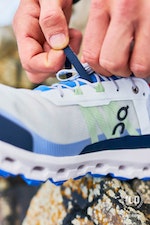 “The Cloudvistas have a great rocker to them which feels like it’s propelling you down the trail when combined with that highly responsive midsole. I’ve been taking this on 10 – 20 km runs and they’ve been fantastic in that sense – this balance of cushioning and responsiveness has been appreciated when running over this distance.

“While On state that the grip is designed for hard-packed trails, I’ve been very confident while wearing them on wet grass and mud, even on the downhill. The sole feels like it grips surprisingly well on this sort of stuff, while it’s not too limiting when you do find yourself back on the trails.

“The only gripe I’d have with them is that I found they do come up a touch on the short size, so I’d consider sizing up if you’re usually between sizes, particularly if you’re looking to run some longer distances in them.”

5 Things We Loved About Love Trails 2022

A lightweight, comfortable and versatile pack with a refined back system and a selection of useful features

Reliable in the most extreme conditions out there, A waterproof, windproof trouser with military-grade protection

Arc'teryx Norvan LD 3 Trail Running Shoe | Review
We use cookies on our website to give you the most relevant experience by remembering your preferences and repeat visits. By clicking “Accept All”, you consent to the use of ALL the cookies. However, you may visit "Cookie Settings" to provide a controlled consent.
Cookie SettingsAccept All
Manage consent