Proving that print certainly isn’t dead, Mpora has just announced the launch of its second magazine, the Mpora Journal Issue 2.

This thing’s a real fresh take on adventure. OK, there are the usual tales of derring-do, but there’s also a big focus on just inspiring a bit of fun and joie de vivre. Expect enlightening interviews with some of the biggest change-makers around, some second-to-none story-telling and all kinds of inspiration for your next journey into the outdoors.

We spoke to the magazine’s editor Jack Clayton to hear about what went into bringing the magazine to life.

What inspired Mpora’s move into print?
This is probably a bit obvious but one thing that did inspire the move is a personal love of print. I’ve been passionate about magazines, and seeing words down on paper, since a young age. I’ve always been fascinated by the craft of it, and the way the best magazines manage to thread that distinct tone of voice through their offering. You get that online as well of course but after years spent working exclusively at the coalface of the internet, with all of its endlessly moving parts, the last year felt like a good time to press pause on ‘business as usual’ and start creating something that would hopefully at least reflect this unique moment in time for the outdoor space and the people within it. I really like that Mpora doesn’t just exist as bits of code on the internet now but in the physical realm as well. In a way, I guess it’s about having the best of both worlds

Would you say there’s a particular gap in the outdoor/adventure and media/publishing market?
I think one thing we sometimes forget when covering adventure is that, ultimately, getting outdoors is supposed to be fun. That’s definitely not to say everything should be covered in some jokey, un-serious, manner as some subjects do obviously need to be treated with a certain level of respect and urgency. It’s just that sometimes as an industry, I think, we veer too far one way and treat everything beneath its umbrella like it’s all some profound mystery beyond the comprehension of mere mortals. 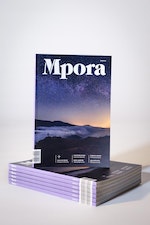 There’s loads of ways to make the outdoors more accessible and tempting of course, and already some good people doing excellent work in this regard, but I think if you’re interested in preaching to more than just the converted you need to start with a more conversational and inclusive tone. I wanted this magazine to address adventure in the same way you’d address a friend in a pub, after the first few sips of something tasty.

Does that qualify as a gap in the market? Maybe. Am I going to say the magazine’s all about putting the fun back into adventure? That’s quite a bad way of putting it not only because there’s some serious issues and topics addressed in the mag but because, more worryingly, it makes me sound like a dad at a disco. Also, it doesn’t even make sense as I’ve just realised there’s no f in adventure. Anyway, I’ve said it now so I guess I’ll just have to sit here and think about what I’ve done. Please buy the mag. Thanks.

Do you think there’s still a future for this kind of media?
As the popularity of vinyl records among music fans too young to have been around when they were initially a thing has shown, just because everything’s available on the internet these days doesn’t mean people don’t crave that ownership of the physical object. I think magazines have, in recent years, been going through something similar. That idea of interacting with stuff that doesn’t have a screen can, in 2022, feel pretty refreshing. The internet isn’t going anywhere, and you don’t need me to tell you it’s going to continue having a massive part to play for media operations moving forward, but I think printed things that people can hold, and flick through, and treasure after they’ve read them will always have their place. It’s either that or nothing but NFTs and podcasts.

What kind of person / demographic do you think will enjoy reading this?
I’ve tried to make the magazine feel accessible for someone who’s maybe just getting into the outdoors, while also ensuring it doesn’t shy away from some serious subjects that both newcomers and people with a longstanding interest alike can engage with. It’s been a bit of a balancing act but I think there’s something for everyone here. If you’re interested in people, places, and nice-looking retro fleeces I reckon you’ll enjoy Issue 2.

John Kelly settles unfinished business by breaking the record for a continuous round of the Wainwrights.

Páramo Protects a 30-Year Legacy of Social Action in Colombia

This Is My Time | Jessie Leong On Her Outdoor Journey

This Is My Time | Jessie Leong On Her Outdoor Journey

‘It's The Start of How We're Changing Our Approach Going Forward’

Polartec has released a statement of intent, pledging to lead the way in promoting inclusivity in the outdoors

‘It's The Start of How We're Changing Our Approach Going Forward’

The New Trekking Event Designed To Help Save the Planet

A global hiking series has launched a special event to honour Earth Day and rail against needless pollution.

The New Trekking Event That Explores the 'Mars on Earth'
We use cookies on our website to give you the most relevant experience by remembering your preferences and repeat visits. By clicking “Accept All”, you consent to the use of ALL the cookies. However, you may visit "Cookie Settings" to provide a controlled consent.
Cookie SettingsAccept All
Manage consent