We told you about Lowe Alpine’s new for 2010
Hyperlite Packs last week, but the company’s
range of TFX big packs
has had a complete revamp for next year with a couple of stonking
looking new packs making a debut. The TFX range was first updated back in 2007, but it’s
about to be refined even further. The most obvious upgrade is the the
back system. TFX packs carry well, but were relatively heavy. For 2010
however, Lowe has slashed weight by 20-30%. Everything’s been fine
tuned with wastage reduced and excess fat slashed. 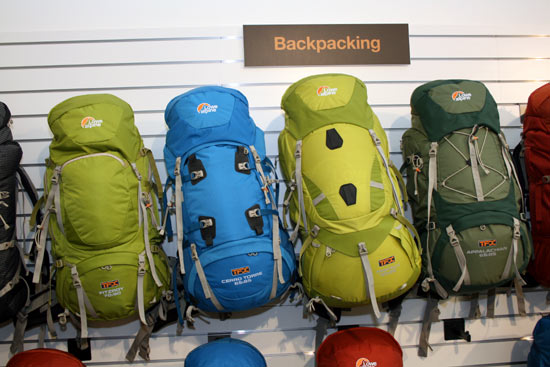 There are three back systems in the range, the top-end version is the TFX10. It’s aimed at
carrying big loads in comfort – think 55-70lb – has a more obvious, but
simple and robust adjustable back system, plus ‘adaptive fit’ hip-belt
and shoulder straps to automatically accommodate a wide range of body
shapes. TFX Expedition – Dyneema
fabric and a weight of
2.2 kilos for a 95-litre
pack

The pack we were really impressed by is the top of the range TFX Expedition 75-95
– £180. It’s a stripped down, simple, but very light
expedition pack that’s intended to still be strong and carry heavy
loads in comfort.

Weight is 2.2 kilos for almost 100 litres of carrying capacity. The
fabric is light but super strong Dyneema-based stuff and the rest of
the weight saving is down mostly to what’s been left off. There are no
pockets, but lots of lash points and a compression system that can be
used to cinch the pack right down for summit use once you’re on the
mountain. The main hip-belt can be replaced with a minimalist belt to
save even more weight. 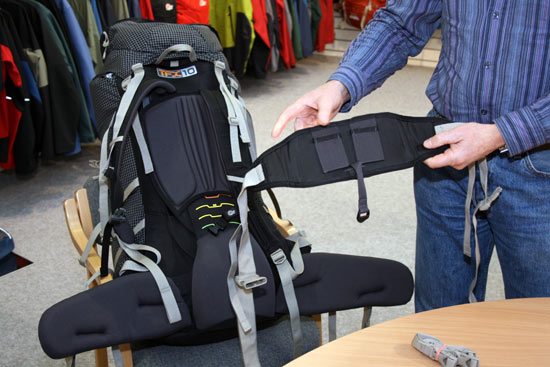 Main hip-belt can be
replaced with minimalist version to save weight
on summit pushes when full compression helps too.

It feels ridiculously light in the hand but still has Lowe’s build
quality and, they say, load-hauling capabilities. The rest of the range has been lightened too. The Fitzroy 70-90 –
£180 – has more bells and whistles with side pockets, side
entry and more and there’s also an alpine crossover pack called the
Cerro Torre, which has no side pockets and works either for backpacking
or for alpine peak bagging, though it’s not intended for technical
climbing.

Next down is the TFX8 range of packs. These use a standard rather than
adaptive fit hip-belt, a slightly softer foam, and spacer mesh on the
straps and back system rather than the smoother fabric used on the
TFX10 packs. There’s also a central ventilation channel over the spine
called the ‘supportive channel’. The TFX8s are slightly cheaper – the Makalu 65-85, which is a
well-specced pack aimed at trekkers with bellows side pockets, front
entry and compression straps will retail for £160 while the
simpler Appalachian 65-85 workhorse retails for £140.

Last but not least, the TFX6 uses a simpler, but still effective back
system for two entry-level packs, the Khumbu and the Outback priced at
£130 and £120 and both weighing in at around 2250
grammes.

The range of TFX ND women’s specific packs has
also had some extensive tweaks. Because Lowe Alpine’s market research
shows women like to organise their loads more efficiently, they have
lots of handy pockets and compartments all round. The back systems are based on smaller dimensions, as you’d expect, but
the lumbar pad on the women’s packs has been modified and tapered, so
it now sits lower on the back rather than high on the waist as the
previous version tended to do. Finally, as with the men’s packs, there are some new colours to enjoy.
There’s no ND Expedition pack this year, but Lowe Alpine is looking at
one for the future. The new TFX packs should be in the shops from around February 2010.
Full details of the current Lowe Alpine range at www.lowealpine.com

Inclusivity | 10 Groups You Should Support

These Organisations Are Helping The Outdoors Become An Inclusive Environment

The list of Scandinavian Outdoor Award 2020 winners has been unveiled...

Wild Camping | When Is It Allowed?

Wild Camping | When Is It Allowed?