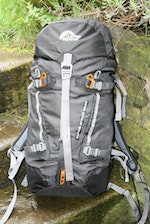 As we said when we took a look at Lowe Alpine’s fast-moving Lightflite 25 last week, the brand’s packs set incredibly high standards of build quality and design, but are maybe getting a little overlooked. That’s true in spades of the Lowe Alpine Alpine Attack 35:45 that rolled up at OM alongside the Lightflite.

The Attack’s an unashamed technical mountain pack and the latest in the long-running Attack dynasty of full-on mountain weapons. What marks it out compared to older Attacks is the relatively light weight despite a whole load of technical features.

Our test pack weighs a genuine 1210g, something you notice as soon as you pick it up. In fact it was a bit of a shock as the last time we used a Lowe mountain pack it was very definitely in the tough but weighty camp. Not only that, but in the modern way of things, you can strip out components like the integral bivi-mat and stiffened frame to cut the weight further to a respectable 820g.

A fair chunk of that weight saving has to be down to the Trishield Grid based fabric. It’s expensive stuff all right, but if you want outstanding toughness with low weight, it’s arguably the best option out there and replaces the Dyneema fabric previously used – we tried to tear a sample with bare hands in it was ridiculously impossible.  The base is reinforced too with heavier ballistic-type Nylon as are the front and back of the lid.

The harness and back system are quinitessential Lowe Alpine, with both hip-belt and shoulder straps using ‘Adaptive Fit’ which allows the harness to easily cope with varying body shapes thanks to a simple tapered attachment points, which allow the straps to sit naturally on a variety of body shapes. Hard to explain, but all you really need to know is that it works.

Also classic Lowe are the tough anodised, glove-friendly, alloy buckles – the ‘Loadlocker’ which holds the single main strap in place and the ‘Webcatcher’ which does the same for the side compression straps. Nice to look at, but also very effective particularly if you’re wearing winter gloves.

There’s also a neat new ‘Headlocker’ feature, an alloy bar that uses the leash holes on modern technical axes to hold them in place. Again simple to use and effective in indoor messing about anyway.

The lid’s a floating design giving an extra 10-litre overload capacity when needed and it’s a neat little unit too. The straps on the back side fix at two points giving a more even pull down on the lid for neatness.

Plenty of climbing-specific stuff going on too. Triple haul loops so the pack sits upright if you do need to drag it up a wall. Then there’s an under-lid rope strap which loops right around the rope, so you can flip it back out of the way to access the main opening without needing to remove it – good rope admin. And you can quickly feed the hip fins back into the side pockets for unobstructed harness use after unthreading the waist straps so the pack is still fastened around your waist.

Finally you can also strip out both the minimal foam bivvy come back-pad and the sprung steel frame to save weight when needed. We wouldn’t choose to bed down on the minimalist mat, but then alpinism is all about the weight to suffering ratio, right?

Light, tough, cheap? Pick two? Pretty much – the SRP on the Alpine Attack 35:45 is a cool £130, but that reflects top-notch materials like that Trishield Grid based fabric, some great features and serious build quality. Definitely near the top of the tree if you’re after a serious alpine come mountain pack.