After a two-year pandemic-enforced hiatus, last month saw the return of ISPO Munich, the European tradeshow where the world’s outdoor brands, store owners, product buyers and press gather to unveil their latest developments.

The show was smaller this year, perhaps half the size compared to the 2020 show, mainly due to the almost total absence of the snowsports industry – the new pre-Christmas timing perhaps not being quite right for the brands and buyers. There were a number of notable absentees from the outdoor industry too, including the likes of The North Face, Columbia and Arc’teryx. Still, big brands like Patagonia, Fjällräven, Rab and Vaude were present and there were also a lot of new companies showcasing there, some of which we’ll introduce you to within our round up below.

Each year there tends to be some kind of theme or trend to the products unveiled. Not so long ago, “we’re getting rid of PFCs” was what we’d hear from brand reps as we moved from stand to stand. This time, they were talking about “trying to waste less”; talking about longevity, repair schemes and circularity. OK in some instances that’s going to be hot air unfortunately, but for the most part it seemed good strides are being taken – so that was one of the main positive takeaways for me.

Here are a few products that stood out as we wandered from hall to hall with the Outdoors Magic team. 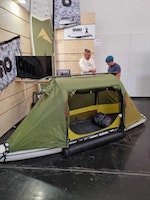 That’s right, it’s a tent on a paddleboard. Called the Bajao Cabin, it’s a double-walled tent with air beam poles that can be strapped onto any SUP from a length of 11.6. With its inflatable side tubes, the tent gives the board additional stability on water and this, the brand says, allows you to camp while afloat. They only recommend using the BAJAO Cabin on flat water, for obvious reasons.

Part of Berghaus’ long-running Extrem alpine range – which the brand seems to have returned to with vigour after a year or two placing what appeared to be more focus on their lifestyle/urban collection – the MTN Guide Hyper Alpha is a lightweight three-layer waterproof shell that’s lined with panels of Polartec’s Alpha insulation. The idea, Berghaus say, is to create something that will, in certain scenarios, save you from having to wear a midlayer.

“Sometimes the struggle is real when it comes to deciding whether to take another layer of insulation or not,” said the jury that picked this for an ISPO Award, “especially if it’s wet and temperatures are just in-between.”

I mentioned in the intro to this article about longevity being a big theme at the show this year and this here, the Woolpower Zip Turtleneck 200, is the case in point there. For this year’s Scandinavian Outdoor Awards at the show, Woolpower chose to submit an eleven-year-old version of this product and it managed to win the overall top trophy.

Here’s the statement from the SOA jury: “By sending in an 11-year-old midlayer sweater, Woolpower has taken a very bold step in changing the way we think about outdoor clothing. The looks with pilling are that of an 11-year-old product, but after that 11 years of use the product still functions and performs to full content.”

This is another example of that built-to-last trend I’ve been mentioning. You see, while some brands were showing off big innovations and complex designs, the main item Fjällräven was showing off was this rather humble cotton anorak. It’s designed to last, to be repairable while-in-the field and it can be reproofed at home using Greenland Wax. The brand says it’s designed for winter activities in the mountains, ski touring, ski mountaineering. 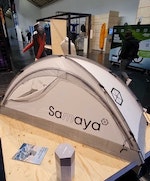 This one-person bivouac tent from French brand Samaya weighs just 655g and it has a packed volume of just 2 liters. It’s made using a bio-based 2-layer Dyneema (one of the world’s strongest materials) with an ePTFE membrane that supposedly provides 20,000mm waterproofing and 40,000g/m2/24h breathability. Good numbers then. The poles are all made from carbon and the pegs are made from recycled materials.

The price? £1,500. So it’s probably more for your serious +4000m mountaineers than your weekend wild campers.

This is a superlight puffer, weighing just 277g. It’s also going to be incredibly warm too and that’s in one part thanks to its 1000 fill power down feathers and in another part thanks to its innovative TILT lining. You know those space blankets you see people wearing at the end of a marathon? Rab have essentially created an inner lining that works in the same way, reflecting thermal radiation back to your body – and don’t worry, it’ll be as comfortable against the skin as any standard liner will be.

This wasn’t the only product that Rab picked up an ISPO Award for this year as they were also recognised for their Rab Mythic Ultra too. Perhaps by no coincidence, both of these jackets feature that TILT tech within them.

Believe it or not, sleeping bag experts Rab have never produced a sleeping mat – until now. I didn’t manage to get too much info on this at the show but what I can tell you is that it’s inflated via a pump sack, it’s lightweight and it’s embedded with the same TILT insulating technology that the Mythic Ultra and Mythic G jackets both use. Looks good.

Well let’s start with the obvious here. It’s a hydration back that’s sealed by a zip – a first of its kind design as far as I’m aware. Called Tru Zip, Camelbak claims that it’s 100% waterproof (obviously when done up properly) and from what I could see, it does look like it should be reliable.

Alongside that, the bladder also has a technology that inhibits the growth of bacteria within the reservoir, the hose can be quickly remove from the bladder to make refills easier and it has a stiffened backplate to help it keep its shape within your pack. This, by the way, was also among the ISPO award winners this year.

This is one of the first products in the world to use Gore-tex’s brand new ePE membrane. Totally PFC-free and made using recycled fabrics, this material has been a long time in the making for Gore and its release has been much anticipated throughout the industry.

The jacket looks a good’un. I love the fact it has elasticated gaiters within the hood and on the cuffs. I tried a Cimalp jacket that has a similar design a few years ago and it was the most weatherproof shell I’ve ever worn.

As well as unveiling a new shoe line and an impressive backcountry skiing jacket called the Odin BC Infinity Shell, Helly Hansen also showcased a new updated version of the Odin 9 Worlds, one of the Norwegian brand’s most popular jackets over the last few years. The main change is the swap to a recycled fabric, of which is derived from plastic items washed up along a 50km stretch of Norway’s coastline.

With its oversized sole unit and plush cushioning, I reckon it’s fair to say that this is essentially On’s answer to shoes from Hoka, like the Mafate and the Speedgoat. When On first unveiled their shoes with ‘cloud’ pods underneath, their uniqueness caused a bit of a stir and the brand saw a rapid rise to success. Now with the Cloudmonster, we’ve got a shoe with not one, but two layers of these clouds on top of each other. Whether that makes them good for running in remains to be seen. We’ll update you on that as soon as we get a chance to test them.

Alongside that cushioning, you can also expect the Cloudmonster sole to have real roll to it due to its rocker-style shape and also the plastic board the lines the midsole.

Unlike some of the products in this list, you don’t need to wait for this to be released – it’s out now.

Protect yourself from the sun with these caps

Best Walking Trousers For Women In 2023

Best Walking Trousers For Women In 2023

Best Running Gloves Reviewed 2023
We use cookies on our website to give you the most relevant experience by remembering your preferences and repeat visits. By clicking “Accept All”, you consent to the use of ALL the cookies. However, you may visit "Cookie Settings" to provide a controlled consent.
Cookie SettingsAccept All
Manage consent