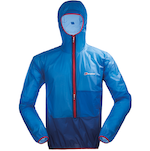 Yes, you read that right. The lightest waterproof shell in the world just got even lighter. Last year’s Berghaus Vapour Light Hyper Smock in a medium weighed a genuine 94 grammes, the new 2015 version that just floated onto our door-mat is an improbably light 76 grammes weighed on our digital scales.

Even with the addition of its lightweight stuff sac, it’s still just 81 grammes and it stows down to a package roughly the size of a tennis ball or an apple – some 23% ‘more packable’ than before says Berghaus. It’s even ‘more waterproof’ with a hydrostatic head of 15,000mm compared to the original’s 7,000mm

On top of all that, the 2015 version of the top is actually £20 cheaper than before at £100. So there you go: lighter, smaller, cheaper, more waterproof… not bad eh?

As with last year’s Hyper Smock, it’s hard to get your head round how something this small and light can actually be waterproof. It packs down to a package the size of a smallish apple and tips the scales at less than most lightweight windproof tops.

That fabric, a PU-proofed, 10D Nylon is super light and so filmy that it’s translucent. You can see the garment care label through the material, but despite that, Berghaus says it’s actually more durable than last year’s version. Durable in this case is a relative term, we wouldn’t rate its chances with sustained pack wear or in contact with abrasive rock, but for its intended fast and light mission, we’re hoping they’re right.

The fit is still super close and sleek – we’re normally a medium, but the sample large size is only slightly too roomy for us – with a close-fitting, non-adjustable hood and elasticated, Lycra-bound cuffs and hem all contributing to the light weight.

So what’s it all about? Well, as with last year, the Hyper Smock’s not a waterproof you’d pull on if you were heading out into a deluge from the front door when you’d go for something more breathable and possibly more featured, but should be ideal for those days when it might or might not rain and you’re going as fast and light as possible.

Somewhere lurking in there, of course, is the question of at what point you choose to add a few extra grammes to your load and gain a little more protection and comfort – the breathability figures Berghaus quotes for the fabric are around half of what you’d get from one of the top-end breathables, which means you’re more likely to get hot and sweaty in your Hyper Smock than in an eVent or Gore-Tex Active equivalent.

One other thing: last year’s business card-sized sleeve pocket, a subject of some derision on OM – has been replaced by a larger mid-torso one which shares the main opening’s zip, but has its own zipper. It’s a slightly odd location, but it’s big enough to take a bar or two or swallow a hat or glove. You can also stuff the jacket into it and save another 5g by leaving the stuff-sac at home, so there you go, gramme counters…

Like last year’s Hyper Smock, but lighter, more waterproof, apparently more durable, smaller packing and with a proper pocket too. All this and the price has gone down to a comparatively reasonable £100, which should make it a viable alternative to a lightweight windproof though at the cost of breathability. All quite bonkers impressive.

Team it with the 156g Hypertherm Race Smock and you have an insulated and waterproof combo weighing in at just 231g – and that’s in a size large. Medium and small versions will be lighter still.

Finally and at last, there’s also a new Women’s Vapour Light Hyper Smock 2.0 – the original was only available in a men’s version – with the same fabrics and features but a women’s-specific cut and a claimed weight of just 67g in a size 12.

The Hyper Smock 2.0 is due out in early March 2015 and we’ll aim to have a full review up by then. You can find full details of the current Berghaus range at www.berghaus.com.

Soft shell trekking trousers on the outside, waterproof and stretchy on the inside.